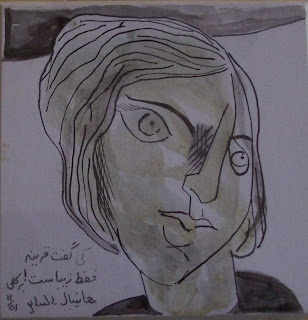 I went to a memorial service for Iranian (Assyrian) artist, Hannibal Alkhas last evening. I listened to his son, Buna, and his daughter talk about their father, among a dozen other students, friends, and admirers of Hannibal Alkhas. Buna's speech particularly moved me. He spoke about his father in the same style as he does his writing and drawing--simply, honestly, and poetically. I really wanted to spend more time with Buna and his handsome son, but time was short as he will be returning home tomorrow.

Since I heard of the great painter's passing, I have had a certain sadness, a sense of personal loss, which has been hard to fathom and convey. I mean I never met him, even though several months ago I had asked Bella how to go about finding him and talking to him. I am so sad I didn't do it. My sense of loss may also have something to do with the painting above. This is a small painting he did in Berkeley in 2001. This sketch and another have been two of my most prized possessions for the past several years. This one has been particularly dear to me, because I believe it to portray me, "The Asymmetrical Woman." He has written at the bottom of the sketch, "Who said only symmetry is beautiful?"

After last night, I feel closer to the artist who drew me without having ever met me, The Asymmetrical Woman! People just couldn't stop talking about how kind and loving and fun he was. My sense of loss at Mr. Alkhas' passing grew last night. But I felt privileged to have listened to his son and daughter talk so lovingly about him. Those of you who have read Buna Nameh have already seen Buna's love for his father, while the great artist was still alive. Those of you who have not read Buna Nameh must absolutely read it. It is probably one of the most original and fantastic things that was ever published on Iranian.com. In a part of his poignant eulogy for his father, Buna read this poem (page 189).

Habbibal Alkhas was a lovely painter. I like the fact that he had his own school of thought. But all in all I was kinda afraid of his paintings! Many of his paintings are like scratching my soul!
(Pleasure you are writing again)

Beautiful stuff! Thanks for sharing your experiences.