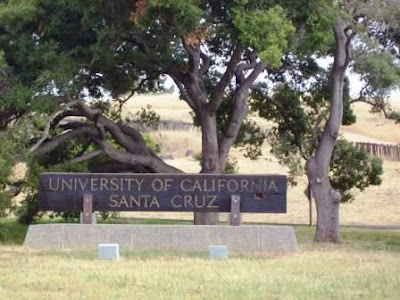 Early tomorrow morning, my older son and I will go to UC Santa Cruz to attend a "New Student Orienation." We will look around the campus and listen to people talk about life at the university. My son is a transfer student. This means that he has already finished two years of college and is entering the University as a junior student. This makes him older than freshman students who will also be there tomorrow. I asked him if he thought it would be O.K. for an older student to go to the orientation with his mother, and he said that he wanted me there. So we are going together. We are both so excited for this day. He has worked hard to get here and has tried several different detours on the way! I have had to do none of that but to watch him during his detours until he found the way! I think it's infinitely easier to be the one doing the detouring and finding the way than to be the one watching, feeling helpless. I am so happy for him. I never forget the day his letter of admission came in the mail. I was running around screaming in joy and happiness, and he and his brother and Iden were looking at me do the dance and the screaming like a crazy lunatic! It would be a long time before the three of them would know what it means for a parent when her child has done the right thing and has arrived at an important station in life, because we feel the pains and joys of our children as if it is happening to us, perhaps with less intensity but with the experiences of our lifetime and the foresight we have developed over the years. I am so happy for my son, who is a beautiful and decent human being, intelligent, articulate, kind, and compassionate. Tomorrow, we are stepping into his tomorrow. I hope his roads are safe and straight and clear throughout his life. But if he has to get lost, take detours, and camp out in the wilderness sometimes, I am confident he will figure it out again soon. His compass is one of the heart and optimism and hope. There is no way such a compass will show him the wrong way. Have a good Thursday y'all.
Posted by Nazy at 11:05 PM

I feel so good for you and your nice son...I exactly know what you feel now; and it seems perfect!

May this happiness last forever Nazy jan and congratulations!

Congradulations to you and your son for this achievement! It is gonna be a new beginning full of excitement and adventure and growth for him.

Dear Nazy
congratulations to you both perfect mother and son...
I touched the wood...
best wishes